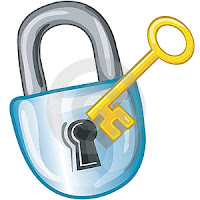 Last night I had a class. It was not a usual class, it more like work. But hobby work. I'll actually explain in another post what the class was about since I have been keeping that under wraps for a while.

We were supposed to work together from 6.30 till 9.30. We were all pretty engrossed in our work when around 8.30 someone closed the door to our room, probably not noticing that we were inside. One of my team members cried out, "Are we being locked in?"

That panicked the others and one of the other guys went to the door and shook it. He couldn't open it. He knocked loudly on it from the inside with, "Hello? Hello??"

Then he tried the handle again and lo, it was open! Phew, what a sigh relief we all breathed. Could you imagine being locked in an empty London office at night!?

I should explain that this was not the usual venue for our class. Our class had overrun its time so we were using the institute's own offices to finish the over-budget work.

Well, anyway, we knew the work we had wasn't going to be finished tonight so we scheduled to meet again another evening and decided to call it a night about 9.45 since almost everybody had plans.

The teacher needed a hand with his equipment so laden with all his stuff, computers and whatnot we went down the stairs. Only to find that the main door was locked!

Well, the first impulse was to jiggle and jangle and pull and push and twist the doorknob. Nothing happening. I went up and tried the buzzer that opens the door when someone rings the bell. It worked but the there was another bolt operated by a key that was locked!

Next we started looking for a fire escape. We wandered around in the recesses of the building with our cellphone camera flashes for illumination but there was nothing we could use.

We were officially locked in!

We went upstairs and in the office where we were working found a couple of large windows that were not barred or locked. It was only an 8 feet jump to a hard pavement. Two or three of us were confident that we could jump that much. But it wouldn't help the others and what about the computer? So that was not even discussed.

Then started the hunt for information. A phone number. Any phone number that could get someone with a key to come and rescue us. We started calling people, direct, indirect, in-indirect contacts who could help. Finally, we found a business card with a mobile number of a person we knew would have the key.

The call was made. The estimate was 20 minutes of wait. Whew, not so bad!

Now where is the point of all this? The point is this - even though were locked in and almost everybody had something or someone to go to there was no real panic in the room. We were total 6 people and not one of us said, even once, "Oh, I am starving!" though we all were.

Nobody complained, nobody said, "Oh God! Why me?"

Instead we just settled back down into our chairs and chatted. One girl found the coffee and milk in the fridge and she made coffee for anyone who wanted. Not me, I am off caffeine as you know. And we all chatted about the projects we had done or we want to do and all around it.

One thing that was mentioned several times was that if we had just carried on working, we could have gotten more done. :)

Calls were made to partners, girlfriends, boyfriends and the situation explained.

And I was thinking, "Wow, these people are cool! They are not a bunch of grouches!" Indeed all of us just took it in our stride and enjoyed a chat with colleagues.

That's my whole point - circumstances happen to all of us, how we react to them decides what we take away from them. Personally, I benefitted immensely from that lockout, I learnt some more stuff, I got some networking opportunities that I would not have gotten had we just walked out and gone our separate ways. I wouldn't be surprised if in the recent future I get some wonderful opportunities that can be traced back to this one instance!

Email ThisBlogThis!Share to TwitterShare to FacebookShare to Pinterest
Labels: Just like that, life, slice of life, Yooh Hi

oh, an eventful evening then!

See, that is what i like about some people. When they are in trouble, instead of moaning and complaining, they try and find a way to get on with what needs doing to get themselves out of trouble or if not that, then they try and make the most of the sitution. Well done,all of you.

Personally, I am like that too. I would focus on the task in hand or try and find a way to get myself out of trouble than wasting time whining and complaining.

Yes, that's what I have learnt to do - do what needs to be done, then don't sweat it. I NEVER press the elevator button twice. :)

I agree with Always Happy, and most of the times we all know, there are some things that are beyond our control, the sooner we accept the circumstance and work with it or around it than fight it, better it becomes.
But its not as easy to accept things as it is to say. Like in your case the situation was a temporary one, life also throws circumstances that are more permanent in nature, thats when we need to draw the line and bring around a change.

Whining takes you nowhere!! Well sad bout the part tht u guys got locked it. But it did get you know your colleagues n students better. Hah sometimes u are so busy with your life that the existance of another soul doesnt matter to u. Atleast by the lockup thr was a bit f benefit too.

Pooja, temporary or permanent, once we behaving like a cranky child and accept that things are as they are, it's usually possible to find a solution.

Red Handed, yes, if we don't waste our energies in whining and bitching, most times we can get benefit even from adverse situations.