Compassion Above All Else 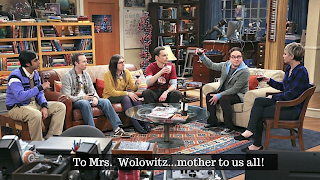 I have done a post before about how sometimes I am conflicted when I like somebody whose work I admire but they are not a great person outside of their creative work. This post is the reverse of that.

While re-re-re-watching The Big Bang Theory, I came to season 8, episode 15. This is the episode in which Howard's mother, Mrs. Wolowitz, dies while she's visiting relatives in Florida.

You may or may not know but this event was inspired, or forced, by the real events. Actress Carol Ann Susi who used to play the part of Mrs. Wolowitz passed away and the show writers had to decide what to do about it in the show. Since Mrs. Wolowitz was never seen and only heard, it was considered that either Howard or Bernadette could do her voice.

What they finally decided to do endeared them to me a lot. They wrote her death in the show, and for the next couple of episodes gave tribute to her by having the characters talk about Mrs. Wolowitz.

Don't we all have that choice in life? The event might not be as big as a death but we get these choices multiple times a day when we can treat others with disdain or with compassion.

Whenever you have a choice - Be Kind!

Posted by Sunil Goswami at 3:46 PM No comments: Links to this post