You can see  a lady spinning in this picture.
If you see her spinning clockwise, apparently it means that your right brain is active and vice versa. And I can assure you that it is possible to see both directions.
You can even change her direction wilfully if you try and focus. I can do it. Can you? :-)

Two and a half men - Charlie Waffles concert

Oh, this is just too funny for words, you have just watch it! I love the kids in this scene, and I kept wondering how on Earth would they have managed a shooting day with so many kids on the set. LOL!

Posted by Sunil Goswami at 5:11 PM No comments:

Email ThisBlogThis!Share to TwitterShare to FacebookShare to Pinterest
Labels: comedy, TV, Two and a Half Men, video

Everything you didn't want to know about - sex!

Just watch it, it's funny!


Posted by Sunil Goswami at 5:46 PM No comments:

Email ThisBlogThis!Share to TwitterShare to FacebookShare to Pinterest
Labels: comedy, joke, TV, Two and a Half Men, video

I wanted to play this tune from the movie Karz for a long time, finally found the right (easy) tabs.

Posted by Sunil Goswami at 4:16 PM No comments:

Email ThisBlogThis!Share to TwitterShare to FacebookShare to Pinterest
Labels: Guitar

How chicks make a fool out of an otherwise intelligent man!

Self-explanatory
[Clip from season 3 episode 13 of Two And a Half Men. ]
Posted by Sunil Goswami at 10:30 PM No comments:

Email ThisBlogThis!Share to TwitterShare to FacebookShare to Pinterest
Labels: comedy, Two and a Half Men

Salman Khan recently sang (lip-synch'ed on screen) "Loveme, loveme, loooveme, your mama says you love, your papa says you love...oh, love me baby, loveme!" And tonight I am standing in a club in Second Life and the song is playing, "your mama says you are crazy..." and so on and so forth, the exact same tune. I asked the DJ, it's called Pitbull-Crazy.

Bollywood is great, what?
Posted by Sunil Goswami at 1:49 AM No comments:

Today I finally restarted my running regime. One thing that helps me and motivates me in my running is an application called BuddyRunner that's installed on my Android phone, my Nexus One. It's a free app but it has great features that you'd need in a fitness app. One, tracking your time and distance, two, mapping your running route on the map using GPS tracking, three, storing your results in a way that you can see them (it uploads to a web-based dashboard), four, creating charts and graphs from this run data. It's very simple to use as well - click Start when you leave home, click End when you finish workout. On the route it vibrates and speaks the distance in my ear at every half-mile mark. Since I already have the headphones in for music, that works very well. 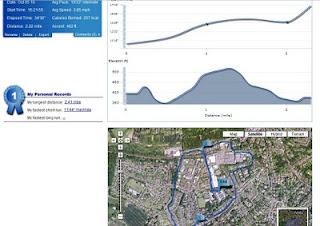 So, back to today, I was not expecting much from myself today having not done anything in the last few months, (except an all-day Salsa class last Saturday, that was brutal!) but I was pleasantly surprised. I have 2 main markers to gauge my performance during the run. First one is the half-mile mark from my house. Crossing the road at a certain traffic signal, after a few more steps is half a mile from my doorstep. Of course, I have BuddyRunner on my phone screen to get the exact mark. I try to hit this mark in one breath. Today I was not expecting that. But not only did I hit the mark, I was not even completely exhausted yet! So I kept on going and touched 0.60 miles. (Yeah, not going to the New York marathon with that stamina, I know.)

Then there is a hill that I have to walk up, it's quite steep, don't think I'll ever be able to run up that slope. But right from the top point there I run down the slope and take a right then cover some more distance on a level road. That's my second mark, to do that whole L-shape piece in one breath. Today, I not only did that but kept going and did 0.70 miles before resorting to walking. My best run is from the start of that L-shape route to my doorstep, which is a full mile.

The lesson here is that you need to try, even if you don't think you will be great, you still need to try, you maybe pleasantly surprised. If not, you will still build up to do better and better every time you try it.
Posted by Sunil Goswami at 7:43 PM No comments: 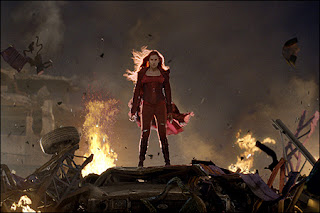 It's pet peeve of mine to witness scenes where the movie director tries to put one over on the audience, be it something related to technology or just plain logic. And my blog, well this is my forum to bitch about everything that bothers me. :-)

Let me lay the groundwork for it before I point out the flaw in reasoning.

1. The movie is about mutants. These people have special powers due to the mutant gene in their make up.

2. In this third movie of the series, a company invents a cure for this condition (I don't buy that mutation can be reversed by an injection, but it's their story, so whatever.)

3. There is one mutant, Jean Grey, a class 5 mutant, played by Famke Janssen. She is more powerful than any other mutant and can literally wreak havoc when her power is loose. She has two sides of her personality - the sweet, loving side and the ugly, power-mad side. She cannot control her ugly side.

4. There is a teenage boy, who is the source of the cure, and any mutant's powers don't work around him.

5. The villain, Magneto, with his army of rogue mutants decides to capture this kid from the factory where he is being kept.

6. The good guys find out about Magneto's plan and come to the factory to support the soldiers who are already there loaded with plastic guns full of injections of the "cure" that can be fired like bullets. Any mutant that gets hit by it becomes immediately powerless and just like a normal human.

There is a big fighting scene in which a lot of rounds of the "cure-bullets" are fired and the good guys are finally winning. They whisk the boy away out of the factory successfully. They even manage to neutralise the big boss Magneto but then Famke lets loose with her power and suddenly everything is chaos all around now.

And here's the scene I don't like. This one hero, called Wolverine (Hugh Jackmen), goes up to her, he can heal quickly that's one of his powers, so even though he keeps getting damaged as he walks closer to her, he heals and keeps going.

So, Hugh walks up to her, delivers his little speech, says I love you, hugs her and sticks his long blades into her that come out of his knuckles (his main power).

Now, here's my beef with this scene. Right here, on this same property where everything is going on, there is a boy who can "cure" or suppress a mutant's power just by standing next to them. And right here, on this property, are countless injections of the "cure" lying around that can permanently change a mutant into human.

So, why didn't they send the boy to Famke, he could walk right up to her easy as eating pie and the chaos would stop. And then somebody, anybody, could shoot an injection into her and fix her for good.

Since she was a nice person apart from her power-crazy split-twin, she was worth saving. So why didn't they?

I can understand what the director was trying to do there. He wanted to create a tear-jerker scene there by virtue of this lost love and sacrifice for the greater good. He failed in that miserably and pissed me off at the same time by going this illogical route. Don't do that again, Brett.

Posted by Sunil Goswami at 4:28 PM No comments: