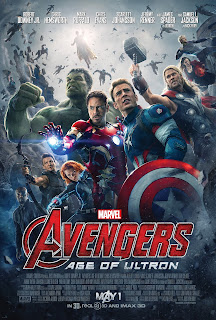 In all honesty, it would be unfair to call this a review. It should be called a rave. And here I feel the need to put the disclaimer, I have not been paid any money by Joss Whedon or Marvel for this review, I have not been sent or offered any inducements and all the four times that I have watched this movie I have done so with my own money.

Having said that, I did absolutely love the movie! Not surprising considering I have been a hard core fan of Joss Whedon ever since I watched "Serenity" follow by "Firefly". You can read how that happened in this post: http://sunilgoswami.blogspot.co.uk/2013/11/firefly-i-joined-cult.html

I was in India when Avengers 2 was released. I watched the trailer and was immediately convinced that it was not a movie to miss. I should clarify here that my main purpose in watching movies is entertainment. Any messages or learning has to be incidental. And Avengers promised to be super entertaining.

With great expectations I booked the second most expensive movie tickets in Delhi with my kids. (And to this day I regret not booking the most expensive ones. If any movie was ever worth it, it's this one.) Usually, I am not a big believer in 3D. It was good for the first few movies that came out as a novelty feature but after that I feel that it's become more of a gimmick, a buzzword to lure the audience and (in some cases) hide the poor storyline.

However, I am not one of those who sleep with their back to the future. I do know that it can be a powerful aid to storytelling if used right. That's the trick, if it's used right by the director, it's an amazing aid to storytelling, if it's used just to add a buzzword to the movie, it's arduous and boring. If I am peering through glasses for hours just to watch a movie you need to make it worth my while.

I would like to give two examples here. Final Destination 5 (2011), 3D is used as a gimmick, throwing things at the audience and such similar stunts. I walked out of that movie a little before halfway through. Three Musketeers (2011) (http://www.imdb.com/title/tt1509767/) the director has used the 3D technology that lends itself to the storytelling. I was spellbound till the very end. Watch them both if you haven't and see if I am wrong.

So, giving Marvel and Joss Whedon the benefit of the doubt I booked the 3D show, on the day that it was released. And I was right. The 3D aspect of the movie has been planned as carefully as the rest of the movie. The screen is used as a stage for the action and it feels all real that way but there's no gimmicky action and no stupid things being thrown at the audience.

Now about the movie itself. If you loved "Avengers" you are going to absolutely love "Avengers: Age of Ultron". In my personal opinion it's even better than the first. And here's why I think so.

There are more awesome characters in it, but all the characters have been giving enough screen time to do justice with them. Because the movie is part of the Marvel series you know the characters well by now and you know what they are all about. And they are all true to themselves in this movie which makes the audience identify well with them. Also we already know the actors playing those characters and it makes it easier for us to like them.

The story is complete in itself but also fits well as part of the large story arc that has been going on including Avengers 1, the 3 Iron Man movies, the 2 Captain American movies, Marvel's Hulk movie, the 2 Thor movies (did I forget any?) and the comic books.

You don't need to know anything just to enjoy this movie, but the more you know Marvel's characters and the back stories the more you enjoy the film.

The dialogue is so amazingly witty and lively that you would remember it and it would haunt you. I have watched this movie 4 times by now and every time I have been impressed by the dialogue. This is especially true as I get more of the dialogue with each subsequent viewing. For example some of the lines that get lost because they are delivered under the breath or are absorbed in fade out's you get them in the second, third, fourth time of watching. And they are witty and amusing!

In the dialogue and in the rest of film, references to the characters and stories are carefully preserved and utilized.

As a director myself, (granted that I director miniscule things compared to Hollywood), I do pay attention to and notice the things a director has to plan with his DoP and 1st AD. And I loved to see that each and every shot in the movie was planned and directed to add value to the storyline. I can't talk about those shots without spoilers so I would leave it at at that.

There is real depth in the movie. I am talking about the depth in terms of human drama, well-defined  characters and richness of the landscape, locales, building and gadgets..and pretty much everything that's part of the movie. I recently bought the Avengers 2 artbook and it's mind-blowing to see how detailed is the planning for each part of the film.

I make films myself (short, low-budget, not like Marvel) and I can hazard a guess as to how much effort and work goes into something this huge. I was wrong! The planning and pre-production work is beyond my imagination! Actually, it's more than was needed, to be honest. I mean I was curious about things like what kind of features does Hawkeye have in his bow? What powers and features does the current Iron Man suit have?

Looking at the artbook I can see they plan things in much more detail than even my curiosity. And that makes the movies so much more interesting than just something that was based on a Hollywood formula.

I didn't do this review for over a month because I didn't see any value in a review that only raves about a movie. I mean, it's Avengers you should know it'd be an awesome movie and go watch it. You don't need me to say it! Ultimately I decided to write it simply becaues *I* wanted to talk about the movie. In order to make it a balanced review, I should point out some of the weak points of the movie as well.

Since watching Avengers 2 the first time, I have re-watched Captain America 1, Thor 1, Avengers 1 twice and of course Avengers 2  three more times and I can say with confidence that they are all immensely re-watchable.

Conclusion: If you haven't watched "Avengers:Age of Ultron" yet, you should and watch it in 3D if you can.
I myself plan to buy the blu-ray when it comes out. Actually, I have already pre-ordered the Blu ray 3D version and I don't even have a 3D TV. Don't worry, I am not crazy, the pack also contains a normal Blu-ray of the movie.

Posted by Sunil Goswami at 9:27 AM No comments: Links to this post