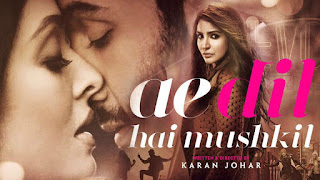 I have developed a new disease - don't worry it's only a cinematic disease. All through "Dear Zindagi" I was thinking how great those dialogues of Jahangir Khan would sound if they were delivered by the great Amitabh Bachchan. After that, in my mind it was always AB delivering those deep, thought-provoking lines. And now pretty early in "Ae Dil Hai Mushkil" I realized what a nice character it was that Anushka was playing. Also, how great it would be if there was a good actress playing that part - like Parineeti Chopra.

After that, my mind took over and all of Anushka's parts I imagined Parineeti delivering on screen. And believe me, the Parineeti in my mind did a much better job than Anushka could ever hope to do.

This is why I had started to make films, because I was always second-guessing the directors but it seems that the problem still persists. So, it's not a new disease really, just a new strain of the old virus.

Posted by Sunil Goswami at 9:14 AM No comments: Links to this post