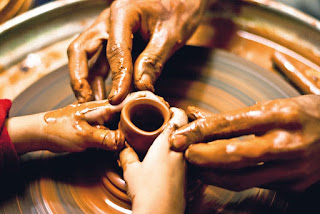 Once upon a time, in a village in India lived a poor artist who used to make idols of Hindu gods and sell them in the daily marked in the neighbouring village.

In due course, this poor artist had a son. As the son grew up he watched his father make those idols, and he got interested. The son also started making the idols under the guidance of his father. Then one day the father took the son with him to the market with his idols. The idol made by the son sold for Re. 0.25. He was really happy. The artist's own idols sold for Re 2.00 each.

The young son made more idols, and his father pointed out the flaws in them and urged his son to do better. The son did do better and his idols started to sell for more - first 50p, then 75p and then a whole Rupee.

There came a day when the son sold his first idol at Re. 2 alongside his father. He was ecstatic. The father was very proud of his son. But he never stopped criticising his son's work.

Slowly the son's work started to surpass his father's. His idols would sell for Re. 3 while the father's idols still sold for Re.2. 00. He still criticised the son's work every day.

One day the son flared up "My idols sell for more than yours. How come you still criticise my work?"

The father took a deep breath "Son, I also used to be like you, my idols used to tell for 10p and slowly I got to where I could sell them for 2 rupees each. But once I became proud of my work, I never got better than that. I stopped at 2 Rs. and I don't want you to stop like I did."

Moral: There never comes a time when you can stop learning and growing.

Posted by Sunil Goswami at 9:15 AM No comments:

The Value of a Gift

I like to give useful gifts. Something that the recipient can use and employ in their job or hobby. So flowers are out, at least on their own, no show pieces, and not even clothes, they get worn and torn. It has to be something useful and durable that will remind the recipient of me for a while. 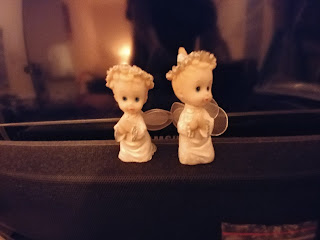 So, what are these things in the picture? They are two little figurines given to me as a gift by my niece Santosh on one of my birthday. They are two little matching angels. I don't remember how long I have had them or which birthday she gave them or even my other kids were in on the gift or not. They would remember better.

What I do remember is that I either still lived in India at that time or had recently moved to the UK. Santosh was not married at that time and now she's married and has her own little daughter who goes to school. So, a long time ago. Considering that I have been living in the UK for last 10 years, they are at least 7-8 years old in my possession.

In the 10 years I have moved several times within the UK. Every time I move, they move with me (obviously) and they are the one of the first things I unpack when I get to a new place. And they always end up in front of my telly. My telly may sit on a table, a desk or a dresser but they always end up on that piece of furniture in front of the telly.

Sometimes one of them would fall down and I would pick it up. Sometimes a wing may bend and I will pull it straight. But other than that they have lasted the test of time.

Every time I look at them, every single time, they remind me of Santo and my other kids!

So what's the moral of the story? The moral is not for you but for me, "The value of a gift is what it means to the receiver, not the general world."