Friends with Benefits - Must Watch 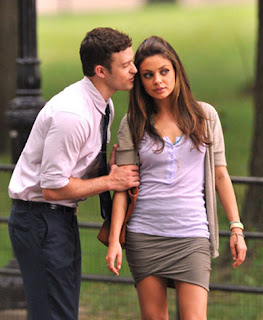 Now that I have been to see it twice I think I should review it as well. Don't worry I won't review it twice.

I have seen it twice so you can guess that I love the movie. Here I am just going to list out the things I loved.

First and foremost Mila Kunis. She is a petite girl, but man, what a body! She's absolutely gorgeous! Even in simple sleeveless shirts and tank tops she looks very hot! Acting wise....huh, acting? What acting? Just kidding. I did notice the acting and she has done very well.

The second thing is casting. All the characters in the movie are well-established actors, I am not talking star cast, I am talking character actors who know their craft. Justin Timberlake has done well in his role as the male lead. All the characters have been cast well and they have all done justice to their roles. Jenna Elfman plays the role of the hero's sister quite well. She is an experienced actress and it shows in her performance.

The third thing is also casting. The casting director is obviously a man after my own heart. Wherever he has to have a female extra, he thinks - let's bring in a real hottie! Well done, Lisa Miller Katz. Oh wait! It's a woman, who did that casting?!! Honestly, I checked the IMDB page for the crew after I wrote the beginning of this para. And now I see that there are a lot of women on the crew.

Including Tia Nolan who has done the editing. And she has definitely done a great job. It's not often that I am impressed by someone else's editing these days without try to find faults, but Tia has made her mark there.

Another one of my favourite characters is Woody Harrelson. I saw him first, like most people, in the American sitcom "Cheers". He has done well in his films as well since then. But in this one he really shines. He plays the gay sports editor who works with Justin and he is hilarious!

The story in itself is simple but not weak. If you had to plan a movie on the theme of two friends who try to add casual sex to their friendship I am sure you'd be able to plot it along similar lines. But still the direction and editing are fast-paced and the story doesn't lag.

Dialogues are extremely smart. They are witty and quick and quick-witted as well. (You see what I did there ;) ) I loved the dialogues right from the first scene.

Justin's father has been shown to have Alzheimer's and I am glad they have treated the disease with dignity and restraint. They have managed to introduce humour into the situation without disrespecting either the father character or people with Alzheimer's. In fact, there's a scene where Dylan (Justin) supports his father in public and the scene is both humours and touching, esp. to me.

Soundtracks are very well-chosen, even the phone ringtones.

The "small cute thing" and the "big romantic gesture" type things have been done well with good direction. They are corny as any Hollywood romcom would be but not cringeworthy.

There's some male nudity in the film. This was my biggest complain about The Inbetweeners even though I liked the movie on the whole. In FWB, it has been more than compensated by the female nudity (Mila Kunis, man!) so I am looking the other way on the male nudity (notice the pun!).

The bad things about the movie? That'll be hard, but I'll try. Everybody in the movie makes a big deal about the difference between L.A. and New York. Almost like LA people are hillbillies. They are both modern, American cities of considerable size. I don't think there's that much difference in the cultures. But I have only been to NYC not LA so I won't sue anybody based on that.

In the beginning of the movie, Mila is trying to sell Justin on NY and he gets taken in very easily. It's like he was just waiting to be sold.

Mila and Justin become good friends a little too quickly. I found it hard to buy. Though I might be just jealous that the bastard got to bang Mila. ;)

In conclusion, it's a good entertainer and well worth going to see. Another beauty of the film is that you can go to see it either with your special someone or your mates. You'd enjoy it either way. Piece of advice, the first time you see Mila's legs on screen, don't say "God, I want her!" out loud if you are seeing it with your girlfriend!

Posted by Sunil Goswami at 4:59 PM

I also like Friends with Benefit a lot.Have to agree wit you that Mila Kunis looks stunning and hot in this movie.The cast of the movie is very well selected and done their job well.I really like the dialogues of the movie.I would say Must Watch movie.