Failure is NOT an option

"We will not go quietly into the night."

Posted by Sunil Goswami at 11:28 PM 2 comments: Links to this post 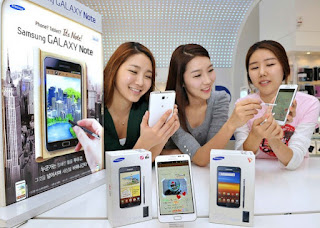 Since I am expecting to get my next phone - Galaxy S3 today I think this is the right time for me to write a review on my last "new" phone - the Samsung Galaxy Note - N7000!

There is not a lot to say except that it's an amazing phone and I am very happy with it. I bought it about 2 months ago, I have been using it every day despite its big size and I just love it! I still have my Galaxy S2 and that's also a great phone but I had basically kept it as a "small" phone for going out and stuff where the Note may be too big. So far, I have not had a situation where I'd want to leave the Note home. On the other hand, I have actually left the S2 home sometimes mainly because the sim in it is for my second line and if I am going to take only one phone with me I'd rather take the big-screen wonder that's the Note.

On the train, that big screen is fantastic! I have stopped carrying my 7" tablet because of the Note. The screen, in size and quality, is quite good enough to watch media without carrying a bag to carry the tablet. The Note fits fine in my jeans pocket and is too small for my jacket pockets. When the Note had come out I had decided not to buy it because of the huge size. These days I don't even feel the huge size, I think it's just the right size. Compared to it my S2 feels small, I don't know how an iPhone would feel, tiny?

I have not been able to use it much as SatNav in the car mostly because I have not been able to find the kind of car holder I was looking for. I did use it once for a short distance and it is awesome to have that 5.3" screen for all the information. So convenient. You can't describe it, you can only experience it!

I have used it while walking around, using Google Maps and it works very well. Very responsive and of course the big screen helps you see more.

Come to think of holders, I haven't been able to find a really good case for it either, with a good kickstand. I have tried 3 so far, all failed. So these days I use my GorillaPod for watching videos on it and that works.

The speed is really good. According to benchmark it's not as fast as the S2 but the 1.4 GHz, dual-core CPU is really good and the experience is amazing. On that big screen you can set-up widgets that look good. I try not to overdo it. I am using Nova Launcher, the free version, which gives me 5 home screens and a 3screen dock below, plus resizable widgets. Mostly I just use a home weather widget, a facebook feed app and a Google reader app, plus a couple of small things like minimalistic text time and Google search bar.

The S-Pen, or as you might call it, the stylus, is very good. When I had read reviews and people said they don't use the stylus much, I was like, yeah, they are idiots, but actually I don't use it much either. And yet, it's indispensable, I love it! It's the stylus that keeps motivating me to sketch even though I am crap at it. It was because of this that I bought a sketchpad and a set of pencils. I still don't use them, but I do use the Note and the stylus to draw once in a while.

Even though I don't use the stylus a lot, when I do use it, there's nothing to replace it. For example when on the phone and looking to jot down something quickly, I look for a pen. There are 100's of note-taking applications for Android but I always ended up making a note in the SMS. But stylus is a pen, so when I start looking for a pen, I find it quickly, and just a double-tap on the screen with the S-Pen launches a new note in S-Memo where I can write in my own handwriting. Absolutely perfect solution!

Another place where the stylus is indispensable is  taking a screenshot. It's perfect. You can even doodle on the screenshot. With ICS Samsung has also launched "S Note" for the Note which lets you combine photos, maps, screenshots, handwriting and other media in a variety of creative and useful ways. It's just awesome!

The Note is much closer to being a laptop-replacement than any other phone so far. The big screen makes it much more usable. The keyboard is bigger, the webpages are easy to read...I love to post photos from Note to Facebook, or my own drawings. Once I edited a video, annotated it and uploaded to Facebook without touching the computer at all.

I had the foresight to buy the phone in white colour which is awesome. It looks so good, even after two months of using it, I still love the form factor and the design. This is one phone that makes even my iphone owner friends, "Well, have to admit that's a great phone for watching a video."

That's another thing about the Note. People just cannot ignore it. How can they, it's so big! I use it all the time to share a YouTube video with my film group in a meeting. Now that I am making films, it's good to have a phone like Note to show people your work.  Last time we had an audition I had to meet 7 girls, each at half-hour intervals, and one after the other all seven of them asked, "What is that?" "Is that a phone?" "Is that a phone or tablet?" "Oh, is that the Galaxy Note?" It's an attention grabbing phone!

Wow, I guess  I did have something to say about the Note after all! And I can still go on.

The battery life is very good. Not as good as the S2 but the 2600 mAH bettery lasts through a day of normal use. With my heavy use especially when I go out, I have 2 spare batteries. They are cheap and easy to change. Because I watch videos on the train to London, use Google Maps when location scouting and use the internet heavily, plus normal phone calls, texts and IMs, my usage when out is very heavy. Usually I end up using about 1.5 batteries round-trip. That includes travel in the tube as well when there is no signal and the phone spends battery power in signal search (normal mobile phone) behaviour. I also use bluetooth continuously for media as well as phone calls, that also drains power.

Browsing the web is a joy on this and I feel the difference when I do the same thing on my S2. Because of the screen size and resolution I am much more comfortable browsing a full desktop site on the Note than on S2.

The speaker volume is very good when at home, I can play it in one room and hear anywhere in the flat. It's just such a versatile, beautiful, fast, amazing phone. I don't think even S3 can top it in some respects but then, I am not planning to replace it with S3 so there's no real competition for me.

Posted by Sunil Goswami at 12:53 PM 7 comments: Links to this post