Firefly - I joined a cult! 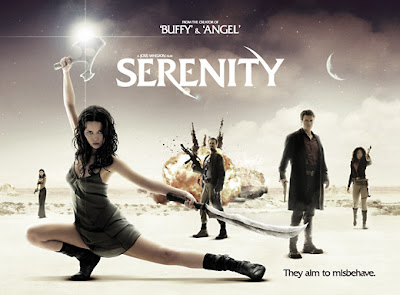 You can't guess what I am watching these days. I am confident enough to offer a wager but let's not go that route. I will just tell you.

It's not a movie, it's not a TV show, it's not a documentary, not a music video, not a home movie, not even an advertisement....give up yet?

Long long ago on a planet called there was this man called Joss Whedon. He wrote and directed a show called Firefly. The show had low network ratings and was cancelled after one season by Fox. But the people who watched the show were immense fans. Not just fans but crazy fans. They actively tried to resurrect the show, even raised some money for it.

It didn't work. But then later on in 2004, Joss Whedon made a movie based on a show, it was called "Serenity". The movie had some overlap in the story from the show and then progressed with the story. The movie was also loved by the Firefly fans and got more coverage than the original show.

Couple of years ago I across the movie - "Serenity" and got it. I love sci-fi movies. But I have a huge choice of movies and TV shows that I can watch so I try and see the trailer, find out about the movie and see which one tempts me the most.

In a quick research I found out the story that I have mentioned above. I read that this show and the movie have a cult following. Now, honestly, I am not much for cults. But the movie itself seemed interesting to I want so far as to watch it.

The movie was fantastic! I love sci-fi and I have watched a truckload of them but this one just blew me away. Not just from effects, they were good, but the story line and characters, the writing was simply great!

Then I just had to get the TV show. And once I watched that...well, there was no going back! I was hooked! And I joined the rest of the world in feeling awfully sorry that the stupid network cancelled this gem. The DVD version of the show has 13 episodes, the pilot is 88 minutes long, but rest of the episodes about 42 minutes each. Even when I was watching them the first time, I could feel that I was watching something special! That's rare!

The thread of this thought. Every year, there are several huge events held in America centered around comic books and other related stuff. I don't know if there's any held in UK at all, but US is the kind of place where this kind of fun things take place. These events are Comic con, Dragon con and Sci fi event.

As you can imagine all kinds of nerds attend these events. As part of these events there are some panels made up of the cast and crew of TV shows and (I am guessing) movies. The cast and crew on these panels answers questions in front of a limited audience. Sometimes the questions are asked by a moderator, other times directly by the audience, it can be a mix as well.


One of my favourite TV stars Zachary Levi (Chuck) has started a charity for which he organizes informal panels where audience can ask what they want of their favourite stars.

All these events are recorded, some on personal cameras, some professional (Zachary's Nerd Machine YouTube channel has the latte) and they can be found online mostly on YouTube.

Even though firefly has been cancelled for 11 years now, there is still a huge demand for a Firefly panel at these events and they are well attended.

And that is what I am watching these days!

I don't know how I found the first video but once I watched it, I was hooked. I had never watched anything like that before. I find that I liked to hear about the show and hear its cast and crew answer questions about it.

In 2012 there was a 10th anniversary of the show's cancellation and there are videos from those panels at Comiccon and other events. There are other interviews from 2013, and some 2010. I am just finding all that I can and watching them. They are damn addicted!

I am very impressed by the cast and the audience alike. The cast members and the crew (writers and director) are always so in love with the show even after doing other stuff in their careers. And you can see the chemistry between the various cast members and director, writers. These are successful Hollywood people and yet when they talk to the audience they are very down to Earth and friendly.

Oh, and they are witty! The videos are so funny because of their wit and leg-pulling humour. But the fans are also amazing! They ask these fantastic questions, some insightful, some cheeky but all interesting.

I am enjoying these videos very much.

The tagline that you see in my previous post "You can't stop the signal!" comes from the movie Serenity and is kind of catchphrase.

Posted by Sunil Goswami at 1:07 AM No comments: Links to this post

You can't stop the signal 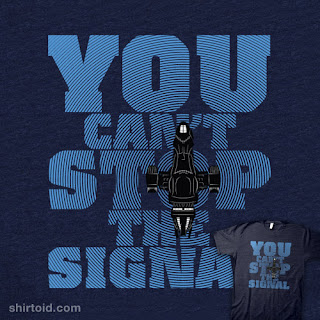 Posted by Sunil Goswami at 8:07 AM No comments: Links to this post