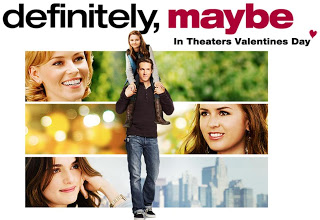 I realize this is my third movie review in a row but while writing the words about narration in "I hate love stories" I was reminded of this movie that I recently re-watched. And I can watch it again in a few days.

I won't do a full review of the movie as it's a simple love story but the most interesting thing about this movie is the organization of the material, the continuity. Or in this case, the narration device.

Story starts with this young girl about 10 years old, being picked up from school by her father. And guess what she learnt in school today...yes, you guessed it, about sex. She steers the conversation towards how her father and mother met. So, after a couple more scenes, he starts to tell her the story of his life. Only he changes the names of the girls in the story.

Mainly it's a story of the 3 girls who came in his life and one of them is his daughter's mother, which she has to guess. While he's telling the story, movie keeps moving in and out of flashback for the daughter to make a comment or raise a question. I like that because this little girl is just so cute...she's adorable! She's the oversmart, a 10 year-old-granny type girl and I just love those. I like how she wants her father to be happy. The father-daughter relationship has been portrayed beautifully. He's a single dad and his daughter wants his mother and father to be together.

The plot is quite good, it goes through some twists, some of which are predictable, but still treated well by the director.

The dialogues are smart and witty, not clichéd. My favourite dialogue from this movie would be a line spoken by (surprise!) the little girl, "Tell her story, like you told me, then she'll know!" Even if this weren't a plot-turning dialogue, I'd still love it. The eagerness in the little girl's face, her deep desire to set things right for her father...man, that's something to watch. I love it! Another one of my favourite is also by the same character, yeah, the little girl asks her father, looking right into his eyes, "What's the boy word for 'slut'?". Makes me laugh, every time.

Oh, did I mention is has Isla Fisher as one of the 3 main girls?! That was the whole reason I watched it the first time. I adore Isla Fisher, not just for her beauty but her personality. I have watched a couple of her TV interviews, damn, she's sexy and fun!

The hero is Ryan Reynolds, from "Two Guys a Girl and a Pizza Place" but who cares. No, seriously, he's done a good job.

Since it's Hollywood, it's a happy ending, but it goes through some nice twists that make sense and are logical based on human psychology.

Conclusion: Definitely watch it, no maybe.

What do you know, I did write a full review.

P.S.:
1. The little girl is played by Abigail Breslin. She's an amazing actress.

2. Here's the trailer for this movie -

If you are a regular reader of my blog, you'd know that only two types of movies inspire me to write a review the ones I love and want people to see, and the ones I absolutely hate and want to save everybody else's time.

Let me say that this one was a struggle to watch it to the finish. I finished it only so I could write a fair review otherwise I was sick of it in about 20 minutes from the starting point.

I am going to tear it apart piece by piece.

Story: With a title like that you'd expect the movie to be a love story and it is. This predictability continues right through the movie to the end. It's a formula film without nothing new to offer in the way of story or creativity. It's chock-full of cliche'd situations that are right out of a movie-making text book.
Plot twists: There are lots of twists in the story, but none that a 5-year old bollywood fan cannot write all out in advance. You give this kid the basic layout of the film and he or she would be able to write down the whole plot in detail. Here's the basic setup - the hero is an assistant director who hates making love stories and works for a director who makes only love stories. The heroine makes sets for these love stories, has a steady, parents-approved boyfriend. I am sure you can predict the climax.
The Cast: In lead roles are Imran Khan and Sonam Kapoor. Both absolute failures. Hindi film heroes used to be selected for their macho personality, then came the chocolatey heroes who had good looks, this guy has nothing. His dialogue delivery makes me want to jump off a skyscraper (as long as I can land on his head). Sonam Kapoor looks pretty in revealing, western type clothes, in normal clothes she looks absolutely ordinary, very lacklustre and not worth being a heroine. Actually I have seen sexier extras in Bollywood movies. Her dialogue delivery is better than the hero but still nothing to clap and dance about.

Hero's friend, Kunal, I don't know his real name, a bearded fat guy whose only job is to give the hero bad advice, is a better actor than Imran Khan but has been cursed with bad dialogue.

The character I liked best was the director that the hero works for. He's an actor who does character roles like husband, son, businessman etc..this is a different role for him and he's done justice to it.

Dialogues: I strongly suspect that all the dialogues have been stolen and translated from Hollywood movies,
maybe all from a single movie or from several different ones. It's easy to see when you see the kind of humour that is used in American sitcoms. You can predict the punchline of most jokes.

Narration: There is an ongoing narration throughout the film in the voices of the hero and heroine, God knows why, because it doesn't add anything to the movie, isn't necessary at all and is most of the time very annoying.

Music: Music is normal, no soul-searing melodies here. And the lyrics are the same psuedo-poetic type that are common in new movies in Bollywood and for which I look down on the English pop music. The songs always slow down the story without exception and the lyrics make me want to puke.

Climax: No big surprises there, after an airport scene, they get together.

Conclusion: If you respect yourself, stay away from it.
Posted by Sunil Goswami at 6:27 PM No comments: Links to this post

Just finished it watching it. It's a pure adrenaline movie, action from beginning to end, with a little romance to provide the motivation sometimes.

The name and cast were so intriguing that even though I converted it to portable MP4 format, I didn't watch it on my 4.3" big screen Android phone. It was really worth watching properly. I have always liked Stallone as an action hero, and then combine him with Jason Statham and it's a double treat. Jet Li I could take or leave, the other characters are quite good in their roles, even if not superstars like Stallone and Statham.

As you could probably guess from the title it's about a team of tough-guys, mercenaries, who do all kinds of rough stuff for money. In typical Hollywood style, the movie starts with one of their missions where they make a dramatic entry. Then the second mission becomes life and death and ends with the movie.

The action is pretty much non-stop throughout, with some gaps for the story to connect the dots. I like Jason Statham's confident, badass style, even when he's talking to his girlfriend, but without being a jerk.

Soundtrack is very good for action scenes. The touch of comedy is present in a few scenes, but they haven't tried to overdo it. The plot twists are not very complex and fairly predictable but still enjoyable.

I like Charisma Carpenter as Jason's girlfriend but the lead girl, Stallone's romantic interest, Giselle Itie, is not really pretty, well not in my eyes anyway. Still, she's a good actress and does her part well.

Oh, there's Bruce Willis in a small role. He fills it well, but it's too small to be anything comment-worthy.

I like the climax, it is long, sustained  action as expected and even though it's a happy ending, it's not a shrink-wrapped type end.

It's the kind of movie that you want to watch again right after you finish it. Maybe I will watch it again soon.

Conclusion: If you are a guy, definitely go for it. If you are a girl, give it a wide berth.
Posted by Sunil Goswami at 12:58 AM No comments: Links to this post

I don't know if this is making fun of iPhone or Android but it's a hilarious video.

Posted by Sunil Goswami at 7:49 PM No comments: Links to this post

I just love this TV show. Can you imagine it's almost 40 years old and still so funny. A lot of credit goes to John Ritter but his co-stars are also great. I loved this scene for its mimicry-based humour but also, Priss and Jenilee look so sexy in this scene. And the dumb blonde girl whose name I didn't google yet. Enjoy.

Posted by Sunil Goswami at 12:00 AM No comments: Links to this post