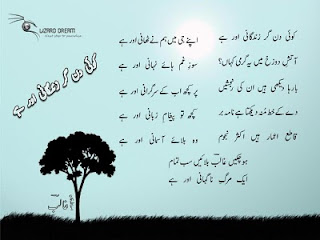 Once again I have picked a favourite ghazal of mine. (The image contains the same ghazal in Urdu)

This is written by Ghalib and it's very popular as expected. It is one of his simple-language ghazals, but still has a few tough words. Let's get into it.

Meaning: The fires of hell don't have the same heat as the burn of the hidden pain. So true man, so true!

The beauty of this sher, IMHO, lies in the long word - soz-e-ghamha-e-nihaani. It's a compound word, joining 3 words together. Soz = burn or fire. Gham = sorrow and ghamhae = plural of gham, sorrows. Nihaani comes from the word nihaaN meaning hidden. So the whole word means fire of the sorrow that is hidden. The hidden pain is more painful because the world doesn't see it but it eats awat at you inside. And because it's hidden, you do not get any sympathy from your friends and family just bear the pain in silence. You see why it's worse than the fires of hell?

Meaning: I have seen her angry mood many times, but this time her anger seems very different. Sar giraani literally means heavy head, but it's expression for anger, naraazgi.

Meaning: This is my favourite sher. "The messenger is watching my face after handing me the letter. There is something she has said to be delivered verbally. "
Even though the literal meaning is quite clear the hidden meaning has to be derived from it. I mean, why is the messenger watching his face, what is he waiting for? His expression on reading the letter? His reaction? What is that verbal message and in what condition will the messenger deliver it? For example, consider the following scenario. when she wrote the letter, she was not free to say what she wanted, written under duress, you know. But then she was able to whisper something to the messenger before he left. And now the messenger is waiting to see his reaction before delivering the real message.

I should mention that all these things only make sense in the context of Indian culture.

Ghalib says that he has seen faced all the trials and tribulations of life except one. The unseen, unexpected trouble of death, that's the only one he's waiting to face now.

I have tried my best to translate and interpret it, but it's Ghalib's poetry, research scholars work on things like these and thesis are written on each of Ghalib's sher's. So, my humble attempt may leave a lot to be desired. Still, if you have any comments or questions, feel free to put them in the comments.

Posted by Sunil Goswami at 9:42 AM