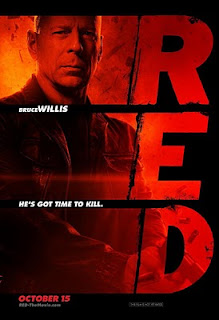 My system of finding and acquiring movies is quite varied, so I don't remember what criteria I used for getting this movie but I am very glad that I found it.

It's an action film, and as happens with actions films the direction is everything. This one has been directed very well by Robert Schwentke!

RED is a CIA abbreviation (in this film) that stands for - Retired Extremely Dangerous.

This is how it starts... Frank Moses (Bruce Willis) is a retired agent, he should be called superagent actually. He calls the CIA pensions department and talks to his case worker Sarah about his pension check that is incorrect. She assures him that she'll get another one sent in the mail right away. They have a pleasant chat during which we see Willis tearing up his original check which had nothing wrong with it.

Then he makes another call to her, another time, and tells her he's coming to New Orleans. She tells him to give her a call when he's there.

Next scene, we see him getting up at about 3 am and going to the bathroom. The camera retreats through walls and we see a unit of commandos with guns ready to raid his apartment.

But here is when we see the true colours of Frank Moses! He's not a gentle retiree from some paper-pushing job, he's a man with reflexes like a tiger and he's deadly like the tiger's mother.

After disposing off the agents, his next item of business is to travel as per his plans but instead of meeting Sarah, he kidnaps her.

The story is not slow up to this point, but it picks up good speed from here on. Actually, maybe that's not right, but you do get a sense that the story is going to take off now.

What I really loved about the film is that despite being a formula action film it's different from the typical action movie. It progresses at a good pace without getting boring and somehow it manages to avoid the usual cliches.

The plot itself is quite good, simple but with enough twists that you don't get bored. The action unfolds nicely as well. No slack anywhere, but still the film moves at a comfortable pace, entertaining and amusing all the way through. It's a 2010 movie so technology is pretty current, stunts are very good.

It's easy to identify with Bruce Willis. He is shown to be a man of action and thought as the situation demands. His romantic side is quite endearing and makes it easy to like him despite his habit of going around killing people.

In the beginning I thought Mary-Louise Parker was "kinda ok" but by about halfway through I realized, she's very cute. I wouldn't call her "hot" but she's very cute!

Karl Urban makes a very good antagonist as a CIA agent. John Malkovich - as soon as he appears on screen you know he's a seasoned actor. He does a great job of playing a paranoid ex-CIA agent. Helen Mirren I liked on sight. She's a bit old for me to think of her as "hot" but there is something loveable about her and the way she portrays Victoria.

The film, despite being an action film with a good amount of violence, is light and fun. I don't want to give too much away in case my readers decide to watch it but there were a few good stunt scenes and a couple of nice drama scenes that would be memorable.

Even as it was running, I was feeling quite happy that it was still going on. Despite being a violent film it has a feel-good factor. When things go wrong you feel confidence in Bruce and his team.

The plot has some good twists and turns which keep one entertained and lead to a normal, enjoyable conclusion. Although I don't mind the gruesome, gory violence that you see in some films, I prefer the "Red" kind of simple violence without too much focus on blood and breaking bones.

All in all a very watchable film for fans of action films.

Posted by Sunil Goswami at 2:01 PM

I jsut saw this movie the other day and I liked it ..

lots of twists and John Malkovich is always a pleasure to watch even Morgan freeman in his little role did well ...

RED is and action with the use of new technology in performing stunt scenes. The story moves on a smooth pace.This movie has lots of twist so you can't get bored. Bruce Willis is excellent in his character even Morgan Freeman did a fair job.