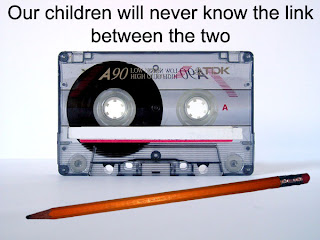 My nephew recently shared this picture with me which sent me back to the past in a flash. Indeed there was a wondeful world of cassettes and cassette players. Unlike most people I didn't use the cassettes just to listen to music, I loved to record. No, I didn't play any music myself back then (yeah, like I do now!) but I loved to record from the radio, or record conversations, chit-chat anything that took my fancy.

In the name of progress we have moved away from the progress and adopted the CDs into our lifestyles. But is it the same thing? I won't go all nostalgic on you and cry about the "good old days" but as a software professional and a man with experience of dealing cassettes, VHS, CDs, DVDs, DVD-R's, DVD-RW's, hard drives, flash memories and the like, I would argue that cassettes were better. Let's examine the evidence without emotion.

Cassette's were fragile, a spool of reel in a platic casing. But CDs are worse. Not only are they bigger and flimiser but they have to be protected even against stains and dirt. Do you know that the label side of the CD is much more fragile then the shiny side the data is read from? Yes, if you wrote on the label side with a normal pen you could damage the data. On the other hand, a little inkblot on the shiny side can ruin your CD. Compared to that cassettes were much sturdier.

Then, talk about recording. Now there was a question that both I and my brother Anil had to face frequently in our respective cities. Whenever we tried to buy a device to record audio, or tried to buy supplies for it, people would say, "Who does recording these days!" and we both had the same answer - "*I* do!" So before you say the same thing to my objection, keep that in mind, I still record a lot of audio, all kinds of stuff.

But CDs cannot record without special hardware. When was the last time you saw a CD-recorder outside of a computer context? Me? Never. But it was so easy to find a cassette recorder in the same size as as a cassette player. I had one that was very easy to pocket. And I have done all kind of recordings using in-line cable and even speakers-to-mic. Yes, bad quality but oh, what fun.

We weren't rich enough afford VCR and tapes but I had my portable little tape recorder so I used to record movies and TV shows from the TV. I particularly remember recording Raj Kapoor's "Jis Desh Mein Ganga Behti Hai". I, my brother Anil and his wife, we were watching it together late at night. My recorder was propped up next to the speaker against our  big, black-and-white TV. (yes, we had only one TV for the whole family, imagine that!)

I listened to that recording many times in the following years. It recorded not only the movie's sounds but also our own comments and laughter in context. That was such an imperfect recording, but it made the recording something special.

I also recorded the Doordarshan serial "Phir Wohi Talaash". I had an almost complete collection of it. I hope it's still there in my room in Delhi where the rest of my cassettes are lying collecting dust as I can't find the video of that show anywhere no matter how hard I look.

Then, the question of repairs. When a cassette had problems, you could fix it with the help of a small Philips screwdriver, a pair of scissors and a bit of cellotape. And of course, the pencil. I have taken complete cassettes apart and put them back together when one of my precious recordings was endangered by a bit of problem. I have spliced over a lot of audio jumps like that.

That's where the pencil comes in by the way. When a cassette developed a problem and the reel started to get sucked into the player head, or if it was wrapped the wrong way around by some mechanical issue you took the cassette out and found a pencil. Then, carefully pulling out as much of the tape as you had to, you straighted it out and then used the pencil to wind it back into the cassette by hand.

With CDs, it either works or you throw it away. But, I guess that's the kind of disposable culture we live in these days. Anything that doesn't work is on a direct trajectory to the trash bin.

Anyway, that's the story of the cassette and pencil. As usual, I took way too much space to tell it. :)

Posted by Sunil Goswami at 5:45 PM