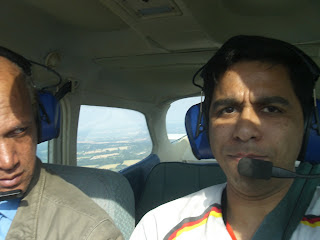 For some time now, I have been planning and learning (slowly) and trying different approaches to get better with this flying this but one doubt always remained - what if I can't stomach it? I can learn it, it's just technical stuff, the mechanical stuff also I can master with practice but let's face it, I am scared in roller-coasters and the reason I decided to be a pilot (one of the reasons) was to face the fear of flying. What if it's too much for me to handle?

So I decided to spend some moolah on a real flying lesson. And guess what it's all going to be alright! It was a small Cessna 172 SP (I mean it was a small plane called a Cessna not that this one was small for its breed), but it is a small plane hardly any elbow room with two people in it. My instructor flew it most of the time, but I did get a feel of the control for a little while. It's not bad. It's quite a nice, thrilling feeling to be up there looking down at the world like a map or (let's face it) an aerial photograph. :)

I enjoyed it enough that I would want to go back up again if I could afford it.

I took a couple of bad photographs and two small, useless videos while I was up there 2000 feet above the ground. But hey, these are not from youtube, they are mine, a record of my very own adventure in the air, so I like'em!


This one is what I saw outside the plane:

Posted by Sunil Goswami at 7:45 PM