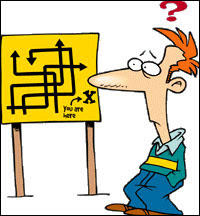 In the land of India, where GPS devices are still not commonplace and Google and Expedia dare not map the unplanned cities, the primary source of directions is by word of mouth. When you ask someone for directions to their house it is common for that person to end the directions with something like, "once you get there, just ask anybody...", the impression being conveyed that the person is so well-known in the area that anybody will lead you to his house once you get in the vicinity. Sometimes the "vicinity" mentioned is as large as a small town consisting of several thousand people.
Of course, as you might have guessed, once you get there you find that your friend is living under an illusion and not only by name, but noone can direct you to his house even by the address.
To be known is a need, sometimes for vanity, sometimes for the convenience of your visitors and quite often for commercial purposes. This last is why there is such a thing as Search Engine Optimization where a team of skilled web designers/developers can optimize you website in a such a way as to be easily found by the popular search engines.
This is one face of the coin - information providers. The other side is the information seekers. The word "Google" has become a verb because it is a common practice to start the search from www.google.com no matter what you are looking for. I have no first hand experience of it, but I have read that people living in big metros like New York City do actually Google their dates prior to meeting them in person.
Now, let me mention the fact for which I have carefully laid this foundation :-) - If you enter the words "Sunil Goswami" (with or without quotes, lowercase or uppercase) in Google's search box, the first link that is returned is this blog. After spending about a decade on the internet I have become "Googleable". I was on the first page before too but now, on top. I don't know if I should feel proud about it but I do. :-)
Go on, try it. I know you want to. LOL.
Posted by Sunil Goswami at 4:55 PM