Why the fuss about Siri? 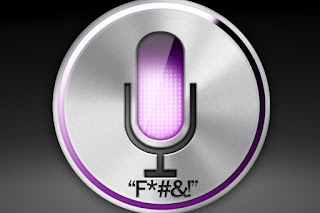 I have tried to ignore it so far but I have had so much mention of Siri on blogs, from other iPhone users and from other Android users that I thought I should put my own thoughts here for reference.

So, why the fuss about Siri?

Or if you prefer two words - marketing budget!

Yes, the only reason Siri has appeared so much on the radar lately is because Apple paid for it. Apple have their own technology blogs and they have their well-established strategies to place their product in the limelight. It's easy to do when you are paying for the light and the stage, either openly or discretely.

Then what's my beef with Siri? Actually, nothing. It's one useful feature in an otherwise useless piece of crap. That it doesn't work as well as advertised and in typical Apple fashion you only get to hear the good news while the problems are suppressed is another matter.

But Siri is basically just a voice-command and voice-dialling system. As I said, it's a good thing. I don't mind it. It's time iCrap users had something that was useful. I do, however, mind the fact that Apple is trying to act like they have just invented the wheel and given it as a gift to humanity! No, sir, that you have not!

In 2005, when I was using a phone called JASJAR, on Windows Mobile, I had a voice command application that could play music, dial phone numbers etc. Even before that when I was using phones that had just the Java-based mobile OS, I had voice commands and voice dialing, including customizable voice shortcuts. I remember having voice dialing as far back as January of 2001.

And on Android, I have had voice commands including voice dialling for a long while, at least a year. But because there was no multimillion-dollar marketing hype to release such things, nobody made a big deal out of it.

What Apple has done, is to re-use that existing functionality and packaged it well, then hyped it until it sounded better than Second Coming. Typical Apple!

To be fair, I don't want to go into the details of how rarely it's possible to use a voice-interface properly as that applies to all of them not just Siri.

P.S. 1. Siri doesn't work in UK if you ask anything like "Where's the nearest Pizza Hut?" It will tell you it can only find things in North America. Now how great is that for the British and European users, and Indian sub-contitent..and Russia..and..well, basically rest of the world. For Apple only North America matter. And is this fact mentioned anywhere in the fancy Siri ads or specs?

2. I have found web articles that Siri doubles the data usage on your phone.
Posted by Sunil Goswami at 9:23 AM

ok me dumb what is siri..

Hehe...you put the whole Apple Corp to shame, my friend. They spent a fortune on marketing and you are asking what is Siri. Priceless! :D

Siri is Apple's voice interface on iPhone 4S which can do some things. But don't even think about trying it in the UK. As I said, the Android voice interface is much more useful but far from promoting it like the Second Coming, they have not even given it a name.