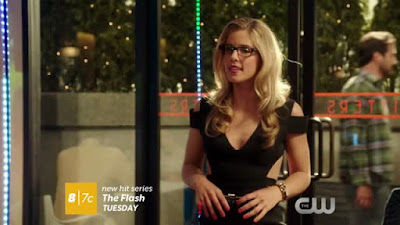 Okay, so I am watching the first season of The Flash the first time and I have some stuff to moan about.

The show is well directed and it's easy to watch. While it's not as amazing as Firefly (nothing ever is or ever will be) where you actually care about the characters but at least you can watch the characters with interest. So, let's talk about some of them.

The Flash. I know he's doing a great thing by being The Flash and fighting crime and what not but seriously if you look at him he's stupid, naive and he's a pussy. It looks like he has trouble figuring out the simplest of things and that he has never taken a tough decision in his life. Dude, your mom died when you were young, murdered, didn't you learn anything in the 15 years?

Whenever he's faced with a villain, he rushes in. Even when he knows the villain has powers that can kill him. Yes, they want us to think he's brave, but that's the kind of bravery that's called stupidity. He makes no plan, he just bumbles in like an idiot. This is demonstrated very well in the episode "Flash vs. The Arrow."

Second, his body moves very fast, but his brains seems to work like a malnourished moron. In any situation, he'd do the thing that an idiot should do. Take the episode where he travels back in time by a day. Harrison Wells tells him specifically not to do anything different as that would have serious repercussions and he just goes and does something so big that it can't but have the granddaddy of repercussions. I mean, doesn't he read science-fiction, he's a geek, right? And it's shown in previous episodes that they have all watched Back to the Future. WTF, dude?

The supreme irony is that even after changing his behaviour so drastically from the first instance of the timeline he expects everything else to happen as it did the previous day. What a jackass!

Take the episode "All Star Team Up". He's up against the main villainess, she unleashes her robot bees at him. What does he do? Instead of using his super-speed to cuff her, take control of the computers, and win the day, he starts running around like a schoolboy to escape the bees. And then when he comes to a glass window, instead of using his super-speed to break the glass and get away, he's like "Oh, Cisco! I am trapped! There are bees all around me!" Gimme a break! Didn't he learn just in the last episode "Tricksters" how to go through solid material? And now he can't go through a huge glass window that a 5-year old would break by hurling a chair at it? Jeez!

Right from episode one I can see that she's a selfish bitch. Selfish, self-centered, near-sighted, stupid bitch! Way too many examples to give so I will try to restrain myself.

Barry has feelings for her. They both grew up together and still she doesn't see it. That takes some serious neglect of the other person because girls are a wizard at noticing these things. Look at how she treats Barry, how she treats Flash, how she treats her boyfriend, you will see what a selfish bitch she really is. Still, I don't blame Barry for loving her, because love is blind, and we just proved that Barry Allen is stupid.

In the episode "Out of Time" she confesses she has feelings for Barry and kisses him WHILE she is in a live-in relationship with her boyfriend AND AT THE VERY SAME MOMENT her father is tied up at the mercy of a super bad villain type person. Awesome girl!

Her blog - what a stupid idea! Endanger yourself and your family even after multiple warnings from multiple people. Even after finding out that the newspaper gave her a job only to exploit her as a "Flash person" and knowing she has told Flash to never contact her, she doesn't leave the job on moral grounds. Selfish, manipulative.

I think by episode 18 everyone should be able to see her true colours when she's like a dog with a bone about how her boyfriend should tell her everything. Even giving him an ultimatum. WHILE at the same time, she never tells her boyfriend about Barry's feelings for her and actively tries to hush it up a couple of times. Double-standard, cantakerous bitch! (I realize I am using the B-word too many times. Can you suggest some juicy synonyms?)

The character I like in this is The Arrow. The actor (I can't be bothered to look up his name now) has brought him to life as a mature, experienced vigilante, who has done it all and seen it all. I was dreading the episode "Flash vs. Arrow" from the title but I loved it when I watched it because I got to see The Arrow in action. And it was worthwhile. He also understands human nature and plans for it.

And my favourite person on the show is "Felicity". I say person because I love both - the character and the actress! Having worked with actors now I am aware of how much a good actor can change themselves to adapt to a role. Therefore I don't know how much she's really like "Felicity" but I love how she portrays her. Felicity is a breath of fresh air in all the drama. She's gorgeous, she's funny, she's witty and she has mad hacking skills. She's just adorable!

(And now you know why I chose that picture with this post!)

When she first appeared on the show I didn't even know who she was but I loved her at first sight. And the more I got to know her the more I loved her. Emily Bett Rickards. Yes, her name I googled even before the episode was over! She plays Felicity so well, I can't tell where her own personality finishes and where Felicity starts. It maybe the producers picked someone who was like the character or it maybe she's completely opposite of Felicity but she does a hell of a job as Felicity. When I finish Season 1, I would probably re-watch only those episodes where The Arrow and/or Felicity are in the picture.

So, a rant and a rave in the same post. Breathe!

Posted by Sunil Goswami at 7:08 AM

This post was indeed a good read and I second to what you wrote. Nevertheless, I just started watching Season 2.. It's my first superhero TV series, so... want to go all the way through..

Thank you, Manju, for your comment. He did seem to redeem himself in the finale but then again....actually, I do plan to post on that episode again. I wasn't actually going to bother with season 2 after watching this...do you recommend it?

Season 2... I wouldn't recommend it .. At least not to you coz you really really dislike season 1 already.. I think you have had enough :D

Thank you for your honest non-recommendation, Manju. I didn't really dislike the show as they have done it well technically, but I did think the characters, especially Flash, and some of the writing was absolute crap. I could watch them one episode after the other so they were not boring, but yeah, won't go for season 2.

Yeah! That's exactly what I did. I binge-watched Flash. I like the technical details like the interesting meta-humans and their abilities and stuff. That's what kept me going.

But now when I look at it, I had this thought running at the back of my head while I watched Flash. I knew he was being stupid. And then a lil voice inside my head kept on saying, well he is being stupid coz he can afford it. Because he is fast, he got friends to help and above all, he heals really fast. But I am still not sure if those are the good reasons to justify his stupidity.

Manju, you are quite right about that and I am glad I was not the only one thinking that. Now that I am watching Arrow, the difference is huge in their personalities. Even Oliver/Arrow makes mistakes, but they are errors of judgments of a grown man like we all do, as compared to Barry's childish stupidity like a boy playing with a super power without understanding the world properly.
Having said that I enjoy the crossover between Flash and Arrow, I am watching the episodes where Barry Allen comes to Starling City for a case, before he's become Flash. And that explains how he knows who the Arrow is. I am liking it! :)

Haha! Glad to know you had the exact same thoughts! I am really inclined towards watching the Arrow series now!

Arrow is awesome! I have watched all 3 seasons and now keeping up with season 4 on weekly basis! I have actually started watching Flash season 2 as well the same way mostly because I want to keep up with the Arrow.Flash crossover instances. I have to admit though, I am not finding Flash 2 as irritating as the first season.