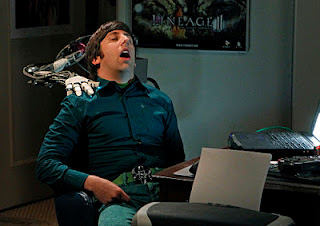 The reason I have used a hyphenated two-part title to this post is that I have more than one thing to day on this topic and I might decide to do other posts with the same prefix "Let me fool you".

I don't like it when film and TV producers/directors take leave of common sense and just go ahead and film something ridiculous completely ignoring the fact that their audience is not totally stupid.

The Big Bang Theory is one of my very favourite shows and I love it especially because of its smart writing. But in one episode they took leave of their brain and wrote with their..I don't know what.

Their follows a comic sequence of SOS calls to friends, a visit to the ER with a blanket over Howard's junk etc. etc. But I could not laugh at it because I do not accept the premise. Think about it.

As soon as Howard realized his predicament he would not be sexually aroused any more, which would make his penis shrink and slip out of the grip of robot hand. Why did it not occur to the writers? Or was this episode written by women?

I just wish they'd stop treating their audience like idiots.
Posted by Sunil Goswami at 12:58 PM

The Big Bang Theory is a nice show, but a little paid by Apple. Sheldon, Leonard, Raj and Penny all have iPhones (I think I saw Howard with a HTC Titan)! And have you seen the episode when Raj falls in love with Siri?!(http://www.youtube.com/watch?v=uZwx1zDTsSI)

By the way, the comments are not working on "Why iPhone sucks". They simply stopped after the 200th comment and won't display any new comments. Do you know what's wrong?

Hey, yes, I have noticed all that. I think it's the "coolness" factor of the brand created by Apple's huge marketing hype. I saw the Siri episode. I don't blame them for it. Because of the marketing hype it made sense to create an episode around it.

But I am making my own web series these days. And one of the episodes mentions the overhyped "hi-phone" ;). It'll be a couple of weeks before it's released but you can start watching the first few episodes of series 1 at http://www.youtube.com/g7filmproductions

The comments on iPhone sucks post have become so many that they have gone to page 2. And the link for displaying page 2 isn't working. Short of moving my blog, I don't know what to do about it. But I am thinking about it.