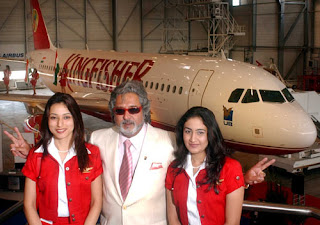 The expression comes to mind "Chadhte sooraj ko sab salaam karte hain." (Everybody salutes the rising Sun). There was a time when Vijay Mallya was the Man, everybody you talked to sang his praises and suddenly all you see about him is the comedy skits and people making fun of him. What happened? Nothing happened, it's just that his airline is in financial straits right now.

I am a man who deliberately stays away from news. Newspapers, TV, Radio, Internet, I don't follow news anywhere. So my news comes filtered through indirect channels like blogs, comedy shows etc. I think that gives me a unique, unbiased perspective on this man. My opinion of him is based on my contact with his business - Kingfisher Airlines.

The first time I flew Kingfisher was about 7 years ago from Poona to Delhi, a short, domestic route of 2 hours flight. I had flown that route before but with Spicejet. The ticket with Kingfisher was double of Spicejet's even in the same economy class. But I wanted to try it.

It was my hard-earned money that I spent on that ticket but I had no regrets. It was worth ever penny! The difference on tangible and intangible levels was amazing! First of all the most important part of any service industry - people. I have been told that Vijay Mallya handpicked his staff. Whether he really did or that his training program was exceptional, I can vouch personally that Kingfisher's staff was exceptional in the true sense of the word. I have never seen any airline staff so attentive and polite and my experience includes several international airlines. Kingfisher staff right from the moment you entered the terminal was always on hand, always very proactive in asking you if you needed help and very proficient in their jobs.

Being a man I don't look much at the male staff, but never forego the chance to look at the pretty airhostesses. (I have heard they are called Stewardesses now, yeah, like I care.) Kingfisher's airhostesses were always good-looking, always dressed smart and nice (attractive I'd call it, not sexy) and the behaviour from them was courteous and professional to a degree almost impossible to find in any Indian service industry.

By that time I had flown so many times that I could recite the security briefing by heart "Iss vimaan mein chaar dwaar hai....aapaatkaaleen sthiti mein.." (This aircraft has four doors...in case of emergency..) but in Kingfisher I watched this briefing with my full attention, and then I watched it in English with the same attention. Why? Because the announcement on seatback screen was done by the gorgeous model/actress Yana Gupta! Vijay Mallya appears in the video right after and promises warm hospitality by his airline and gives his personal email address to contact him directly if you have any complaints.

We all know some flunky in headoffice would be in charge of that email account but it still feels very good. The IFE was always populated with relevant programs and I was always spoilt for choice.

And they give a small gift packet to every passenger, even in economy class. It had a pair of Kingfisher branded headphones and a pen etc. but a gift is a gift. Nobody else had ever given me a gift even when I flew to US with them.

It was these touches which made my experience with Kingfisher so great that I never bought a Spicejet ticket again even though I owned stock in Spicejet.

Years later when I was looking to blow some money by buying a business-class ticket from UK to India I looked for the best business class available to get the most value for my money. You know what I found? That Kingfisher Airlines was the world's first and only 5-star business class airline! Even Virgin, Jet and British Airways are 4-stars. It made me feel a little proud that an Indian airline had that honour!

Sure enough this time I booked my flight with Kingfisher without any doubts. And the experience was memorable for life! I have no regrets.

And now that airline is in financial trouble. But like Jesus I will ask who among us has never been in financial trouble, who has never made a wrong decision when dealing with money? Maybe the beggar on the signal is exempt from this but other than that anyone who deals with money, including Baba Ramdev, makes mistakes. I cannot condemn a man for making a wrong decision in business.

Maybe I am ill-informed (I will make no attempt to fix that) but I don't look at Vijay Mallya with disdain, I think he is a very intelligent man with a flair for living life King size. All these people who were singing his praises yesterday can jeer and point fingers all they want, I for one, wish him the best and hope that he comes out of it, and Kingfisher Airlines flies again.

I may be the only one saying this but I don't care.
Posted by Sunil Goswami at 10:32 AM

I dont have anything against the man, but he is loaded and is filthy rich , why does he want govt help to get the airlines out of debt and all. He wants public money when all the profit is shared by him, he should dip into his money and help kingfisher out.

how much more money does he want to earn .. thats the only gripe i have against him as a person .. greed is not good

and you said gift .. what gift they did not give me any hmmmmmmmmmm :)

Bikram, I am also not saying that the government should bail out a private business. But I won't blame him for trying. In India "Public Money" is a very vague concept. When one minister does 176,000 CRORE scam, and there are too many of such scams to count, I don't blame for anyone to think that govt. money is up for grabs.

What I wanted to say about him I have already put in the post. But for general discussion on greed, I'd not say it's a bad thing, depends on the application. You should watch Michael Douglas's speech in Wall Street on this topic. Here's a link - http://sunilgoswami.blogspot.co.uk/2008/08/greed-is-good.html


Yes, I always got a gift pack in all my Kingfisher flights domestic and international, economy and business class.

well...personally i don't have any 1st hand experience with this airline but i agree with Bikram on point that why should he or his company should be saved by hard earned public money when he is the only who enjoyed all the gains during those golden days.....and if ministers are doing scams or someone is earning money by his ill deeds then it doesn't make any sense that public money should be used for such causes...thats what i feel.....

Irfan ji, I am not in charge of allocating any public funds, and if I were I wouldn't use them to salvage a private business. Rest I have already covered above.