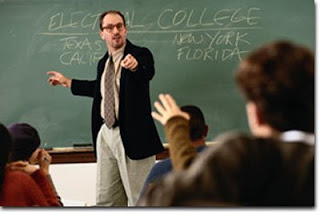 Teachers come in a variety of types, some who would rather be left alone, others who like to take control and drive things. And there are a few, extremely few who actually like to provide intellectual stimulation and make their students really think for themselves.

Mr. Chauhan was one such teacher. When I was doing my computer course we had a situation when we lost our teacher to another job. This, I should clarify, was a very small institute, owned by one person and usually staffed by one teacher. I was hardly in a position to criticise as the fee was very low and even then we had the option to pay in monthly instalments. If I told you how much it was, you wouldn't believe it, it was so low.

So, we had our computer teacher and suddenly he got another job and decided to leave the institute. The owner/manager of the institute, who also taught some classes, got Mr. Chauhan to fill in. We were learning PLT at the time (short for Programming Logic Techniques). Mr. Chauhan came in, and asked us some questions on what we had learnt so far in computers and in PLT. And he had this infuriating habit of saying "Why?" after every answer we gave him. His contention was that you should know the reason why something was so, not just say "That's what we've been told." This did annoy me because at some point that's what you have to say. No, not really. Now, I understand that the chain of answers should stop not at "So we've been told." but at "It's a fact provable by experiment." But we didn't get into that then.

Next we started on PLT. He started to quiz us first.

But that's the sign of great teachers - their words can change your life, and you NEVER forget those words. He told us the "A program is written on paper, not on computer." This might seem blatantly obvious or even flippant but any computer programmer worth his salt would know exactly what it means. When you start writing programs on computer, you do shoddy work and make more mistakes. When you write a program on paper, you do your best work, and that way lies excellence.

He told us that the best paying job in computers (at the time at least) was a Systems Analyst and he hardly ever needs to go near a computer.

In that same class, he asked us more about programs and I was giving an answer when he stopped me and said, "No, not a program, algorithm." Arrgh! That almost sent me into a rage! They were the SAME thing! No, they are not!

Years later he told me that after the class he told our centre manager to keep an eye on me and forget the rest. Hehe, yes, I am proud of that. No way I am NOT going to mention that! But that day I was pissed off with him. But that was always his style, he never believed in spoonfeeding his students. I did very well in PLT, so what did he do? He didn't praise me or anything, he just gave me MORE problems to solve than other students in the class. The result is that I have very strong PLT skills and love to debate with people on the merits of "OR" and "AND" in a line of code.

After PLT he taught us COBOL. Yes, it was that long back. COBOL was on its way out even then but this was before the year 2000 so it was not completely out yet and did make some programmers rich when the Y2K work came. Alas, I was not one of them. Still, I did very well in COBOL and got 93% in the test,  which was not only the highest in the class, it was my highest score in any computer subject.  A year later the centre owner asked me to teach a batch there and guess what subject he asked me to teach - COBOL.

Then there was the incident when Chauhan Sir taught me MS-Office in 5 minutes.

This was a couple of years later, I was a software faculty by now and was teaching in a small institute other than the one I studied in. I was teaching DOS, Windows and a few other things, but not MS-Office. That was new at that time. It was version 4.3 I still remember very vividly. The nice lady I worked for wanted me to learn MS-Office so I could teach it as well. She and Chauhan sir were friends so I could go and learn with him at his institute which was in the same city.

I remember it like yesterday. I went to the pay phone near the institute and called Ds (that’s my code for him) to arrange for classes. He was in office and we talked. I explained what I needed. Here’s how the conversation went:

Ds: Toh MS-Office seekhna hai? (You want to learn MS-Office?)
Me: Yes, sir.
Ds: Kya karoge seekh ke? (What would you do with it?)
Me: Sir yahan padhaoonga. (I will teach it here).
Ds: Wordstar aata hai? (You know Word Star?) (Word Star was an older word processing software, DOS-based, and quite popular before MS-Word came along.
Me: Aata hai, sir. (I know it, sir.) (I was very confident, I was very good in WS).
Ds: Phir? (Then?)
Me: Sir, MS-Office nahin aata na. (I don’t know MS-Office).
Ds: To MS-Office seekhoge. (So you will learn MS-Office.)
Me: Yes, sir. (I was getting a bit annoyed by now.)
Ds: Phir? Naya aa jayega phir woh seekhoge? Kitne word processor seekhoge? (Then, when the new one comes out you’ll learn that? How many word processors will you learn?).
That shut me up and made me think.
Ds: Usko khol lo, help file kholo saath mein, aur karo. (Open it, and open the Help file, and use it.)

The whole conversation took less than 5 minutes, but he taught me MS-Office in 5 minutes. Alongwith that he taught me all other word processors and all programming languages without a computer in sight! Never felt the need to go for a class to learn a new application after that. And I ended up learning many other software and programming languages after that. I started teaching MS-Office later that week and have taught all versions. I pride myself on my Word and Excel skills and even though they are not my primary tools the knowledge has been extremely useful to me in my career.

That’s the kind of teacher Ds was and is. He knows how to kindle the spark and let the student learn instead of crippling him with spoonfeeding.

I am still in close touch with him. Whenever I go to India half of my vacation time is spent with him, either visiting his business or home, or debating something in technology or society.

One thing I really hate  is that he never taught me Chess. He was a state champion in his time and I really wanted to learn to play better Chess from him. But the only time we played together it was like him playing with only 10% of his mind on the game and he beat me, no, actually crushed me without even bothering to “play”. I hated that. But I haven’t given up, some day I’ll trap him into teaching me. ;)

There was a great time, a wonderful period of my life when I was working in his own company. Even when I had a problem in a technology or language that he didn’t know, I would still go to Ds for solutions. And he would sort me out. Without knowing the language and without learning! His logic is just so strong that he always knows what questions to ask.

He had written books on COBOL that were used in schools as textbooks, but he never mentioned it to brag. I found out just by chance. Same thing about his Chess skills. He never brags, never needs to. But anyone who meets him, cannot forget him. I am very proud and privileged that I met him and that he is still in my life as a guiding spirit.

My dream is to one day collaborate with him on a project! Amen!
Posted by Sunil Goswami at 12:18 PM

Email ThisBlogThis!Share to TwitterShare to FacebookShare to Pinterest
Labels: life, My Teachers, slice of life

I liked this post, really nice and true feelings one can give to his teacher.

I personally know Chauhan sir, he's a nice person, but I didn't know this much about him.

Hey Sunil, nice account of how Mr Chauhan molded ur life... am sure this is a very special post.. my hats off to Mr Chauhan n to u.. hope ur dream comse true soon :)