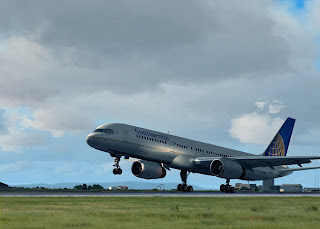 Question: How do you eat an elephant?
Answer: One spoon at a time!

No, no, that's not my way of saying that I have turned non-vegetarian. I am still quite strictly vegetarian other than having an occasional omelette, but I found this English expression quite funny and very apt for what I am about to tell you.
I suddenly got it into my head that I want to be a pilot!
When I took my first, very first, plane journey to US from India, I was quite excited! I loved the feeling of taking off, being airborne and even landing. It was a good landing. But since then I have lost count of my plane journies (nothing phenomenal there, most people do after 6), and during all these air voyages I have had some unpleasant experiences. No, nothing too bad, nothing extraordinary that would get in the newspapers, just simple stuff like weather turbulence where the plane drops for 10-20 seconds at a time straight down and you start looking for something to plug into your mouth (like a shoe) just so you can keep the heart down ; or the landing where the pilot brakes hard immediately after the rear wheels touch down like he's riding a bicycle. Stuff like that has made me kind of...well, not afraid of flying but kind of apprehensive, even during takeoffs and landings, normal ones.
So acting on the age-old wisdom of "face your fears" I thought I'd go for some flying training. Which is kind of weird coming from me as I don't even like roller coasters. That heart-in-your-throat feeling is not very good! Other than that though, flying training in England, (I am sure, everywhere), is quite expensive. I can't afford it! It'd be a huge project for me to take up. The best idea for a huge project, if possible, is to take it in small steps - so I am starting my training from the computer. There are several programs available that simulate the flying experience, some of them free like FlightGear, most of them paid like Microsoft Flight Simulator, arguably the most popular of them all. It's marketed as a game but it is in fact so accurate in its simulation that people do, all over the world, use it as a training aid, before, during or after their real flying training.
Then there are books available for real as well as simulated training which help you understand the concepts and acquire the related knowlege. And believe me there's an enormous amount of knowledge to acquire, it's not just holding the stick (the control column) and moving it back and forth!
During my research on the topic (you are right, it started from www.google.co.uk) , I found this community or rather communities of people who fly a plane on the computer and then online, using software programs to interface with other pilots and even real, live ATCs! I was amazed! Look at www.vatsim.net if you are interested! So, that's the next step of my training ladder. Then there are other things to do, until, step by step I build up my skills on the ground and hopefully also my fund for my real training.
That's why I call it by the funny title, breaking a huge task into very small, minute, doable parts and then tackling them one by one. That's how you eat an elephant....one spoon at a time!
Edit: Thought I'd put a picture there to spice things up. It's a beautiful picture and courtesy of fellow VATSIM pilot Jordan Jafferjee.
Posted by Sunil Goswami at 10:52 AM